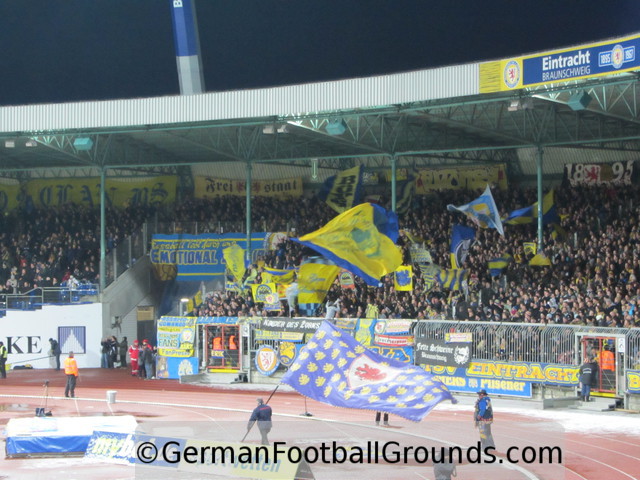 The Eintracht-Stadion was, in the season 2013/14, the smallest stadium in the Bundesliga, although Freiburg's 'Mage Solar Stadium' could only accomodate a couple hundred spectators than the Eintracht-Stadion. The stadium is quite old, having originally been opened in 1923, and it shows. This is due to the fact that Braunschweig was playing mostly in the 2. Liga in the past nearly 30 years, thus not much has changed.

The stadium is very classical and still features a race outer track, of note are the four huge floodlights, something thats you do not see in new stadiums any more. The stadium has a single tier that's basically the same height all around. Some place have line-of-sight obstructions due to the non-cantilevered roof, again something that is quite uncommon in German stadiums nowadays. The main stand has been upgraded for the 1. Bundesliga, the opposite stand has had new seats installed and now spells 'BRAUNSCHWEIG' in yellow on blue, the club's colors.

Braunschweig's supporters (standig space) are located in the south curve, visiting supporters are locate in a part of the north curve.

If you come by car, the address of the Eintracht-Stadion is " Hamburger Straße 210, 38112 Braunschweig, Deutschland".

You'll be coming either via the motorway A2 (from the north) or A 39 (south). Either way, head on to A 391 and at the four way interchange 'Ölper', head towards A 392 / Hamburger Straße. Turn left at the first junction into 'Hamburger Straß' and after 1 km (0.6 miles) the stadium is to your right.

There are basically no parking lots available close to the stadium, however you can park at Ohefeld (see this map) until it iss filled to capacity, from there its a walk of about 1.6 km (1 mile) to the ground. Traffic is a bitch close to the game anyway, so try to be at the stadium well in advance and just look out for a decent parking spot, maybe on the west of Hamburger Straße.

Trams M1 and M2 both run from the main station to the ground via the inner city. Tram M1 stops directly in front of the ground (stop 'Stadion'), tram M2 stops around the corner at the public health department (stop 'Gesundheitsamt'). Match tickets allow you free travel to and from the stadium from two hours prior to the game until end of business in zone 40 of the Braunschweiger Vekehrs-AG.

From the main station, the stadium is over 3 miles away, thus I do not recommend a walk. Have a look at the Google Maps route if you fancy a walk.

The Eintracht-Stadion has more or less four categories: terraces in the south and seating places in the north, east and west. Cheaper seats in the east stand are on the side, there are as well cheaper tickets with line-of-sight obstruction and a family block. You can see a detailed map of the stadium and the prices on this page (unfortunately, only in German).

For match day tickets add 1 € for terrace and 2 € for seats.

Braunschweig got promoted to the Bundesliga after 28 years in the 2. Liga and 3. Bundesliga after the 2012/13 season. Demand for tickets was especially high that season and the stadium has been sold out for all home games. Since the relegation back to the 2. Bundesliga after one season in the top flight, the ticketing situation has become easier again.

You can have a look at this page to see when general sale ('VVK-Start') starts. Tickets can bee booked via Eintracht Braunschweig's online ticket shop. 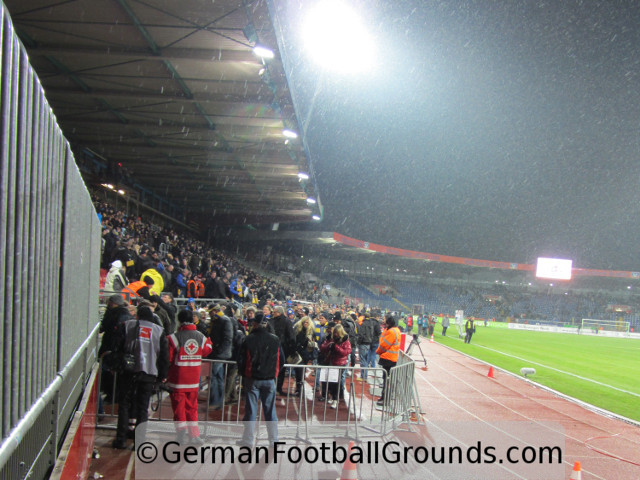 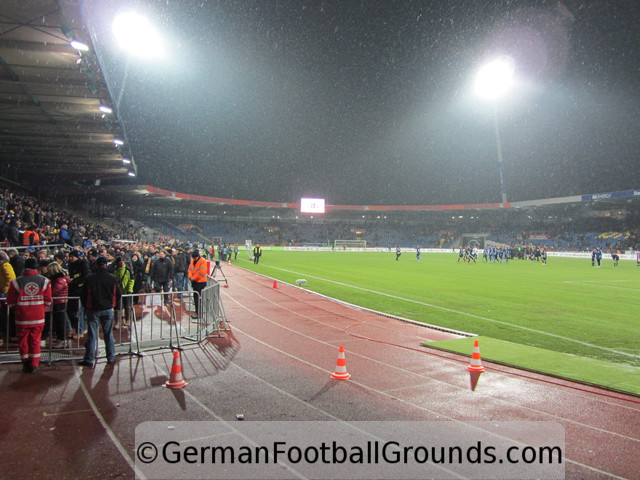 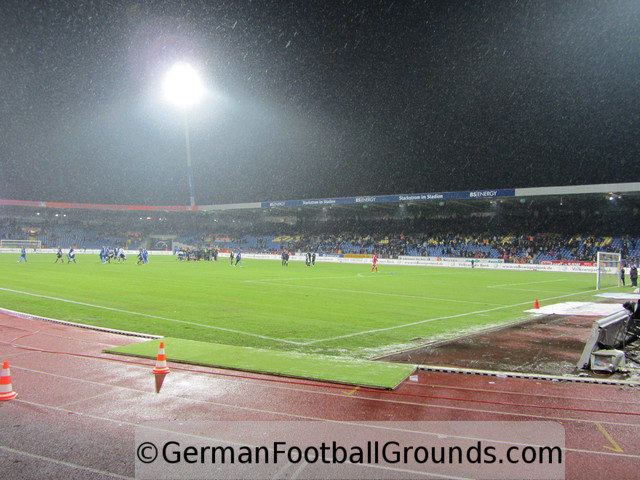 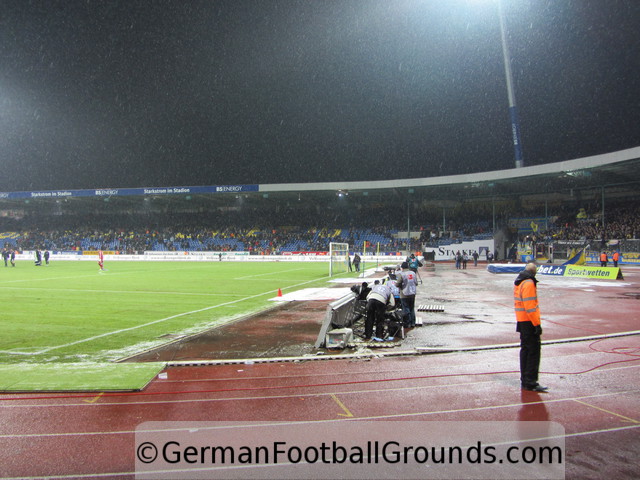 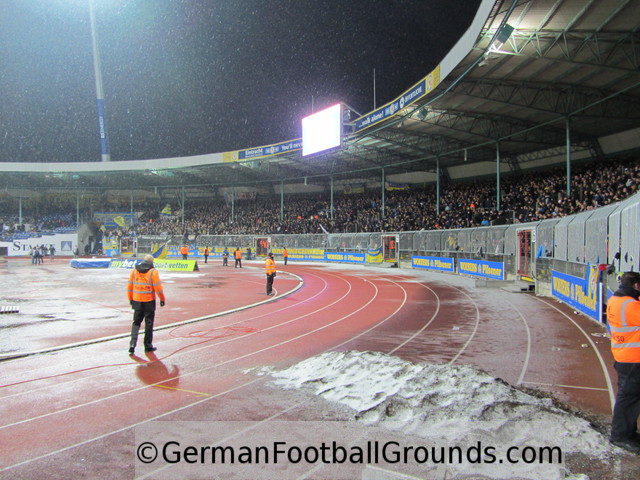 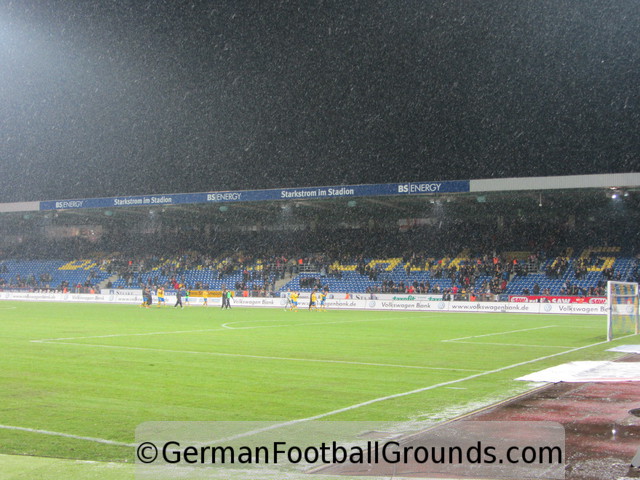 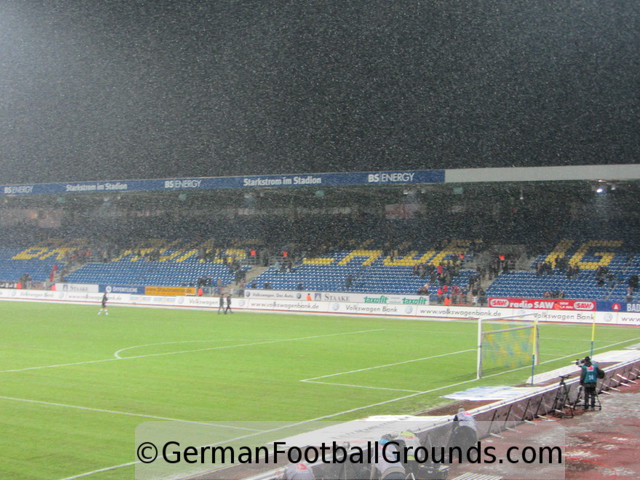