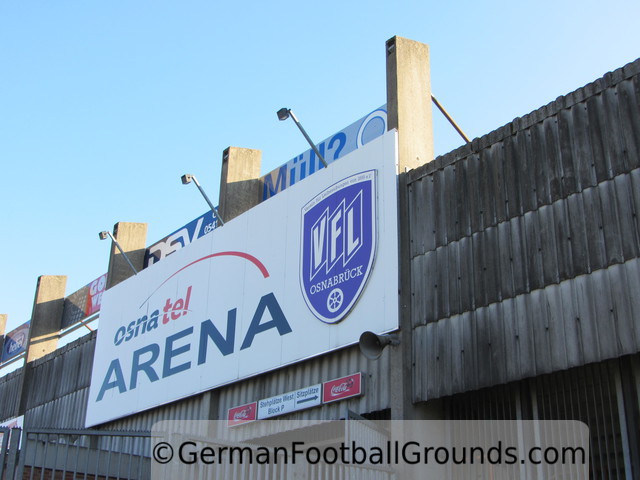 The Stadion an der Bremer Brücke

The Stadion an der Bremer Brücke is a stadium that could be located in England as well, due to the fact that only stand, the north stand, has been rebuilt in now much bigger then the remaining three stands of the stadium, something you do not see very often in Germany. The stadium offers room for 16,667 spectators, which is more than enough for the 3. Bundesliga and would even be okay if Osnabrück would get promoted.

The north stand is an all-seater stand and currently the biggest stand in the stadium, the seats spell "VfL" in white on purple. It is fully covered and has a cantilevered roof, so no obstructions there. It is the only stand without floodlights behind it. Continuning clockwise, the east stand is the home supporters stand with terraces and it is fully covered with a non-cantievered roof, which means some supporting pillars in your way. Two floodlights are located behing the stand and not, as usual, in the corners. In the corner towards the south (main) stand, you find one of two electronic scoreboards, the other is on the opposite side of the pitch. Behind the main stand, there are two more floodlights and although the stand is basically covered, the roof only protects a small part of the stand at the back, seats in the front are thus not recommended if rain is likely. The west stand is basically identical to the east stand and accomodates visiting supporters and a children's area, the second scoreboard can be found here in the corner towards the north stand; there are only a small number of steps below the area where the scoreboard is located.

If you come by car, the address of the Stadion an der Bremer Brücke is "Scharnhorststraße 50, 49084 Osnabrück".

There is a small parking lot at the stadium, but this is most probably reserved for permit holders on match days. Your best bet is to park along Bremer Straße or any one of the smaller streets around the stadium.

From main station to Neumarkt (2 stops):

From Neumarkt to the stadium (4 stops to "Bremer Brücke"):

The stadium is easily walkable from the main station, the distance is less than a mile. As you have to change lines when going by bus, I recommend walking anyway.

Exit the main station to the north and head straight on for about 200 yards. Turn right onto Buersche Straße, pass under the railway and turn left onto Schinkelstraße. After 500 yards, you reach an intersection, turn left onto Oststraße and continue for 200 yards. At the intersectioon with Scharnhorststraße, the northwest conrner of the stadium is directly to your right.

These are normal ticket prices from the 2015/16 season.

VfL Osnabrück draws quite large crowds for the 3. Liga, which means Osnabrück is usually among the top teams in the league regarding average attendance. Still, the stadium is rarely sold out in the 3. Liga.

Tickets can be bought via the club's own ticket shop. 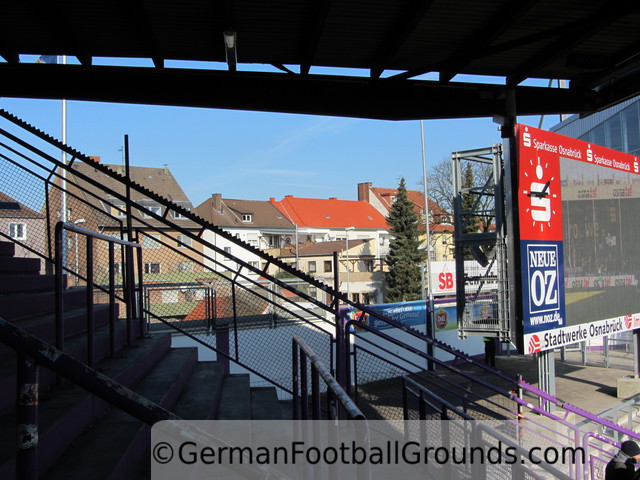 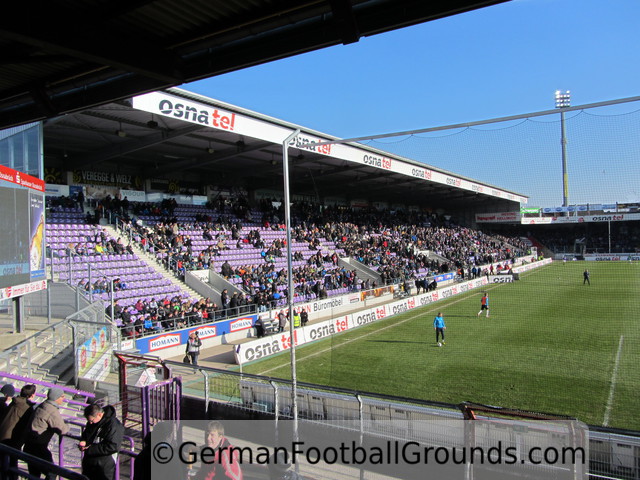 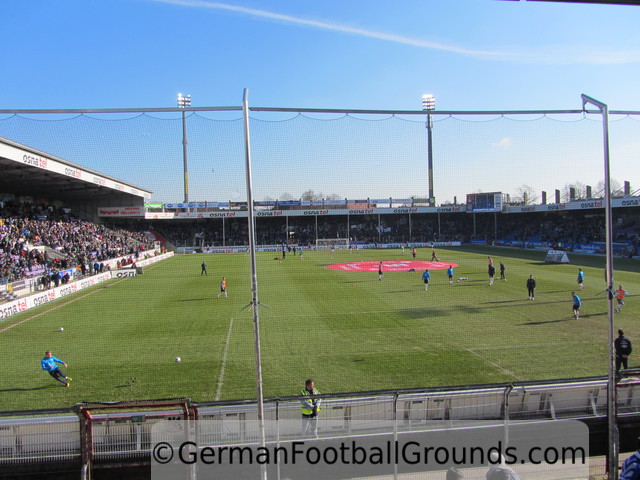 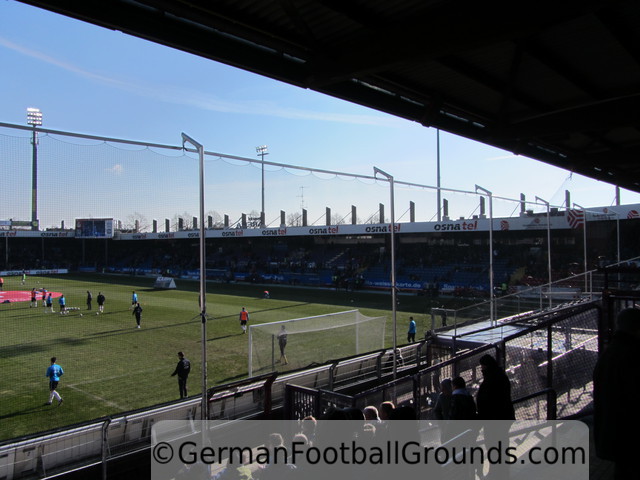 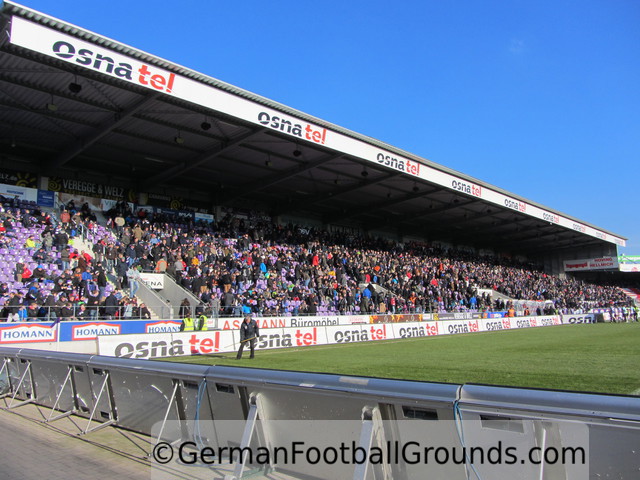 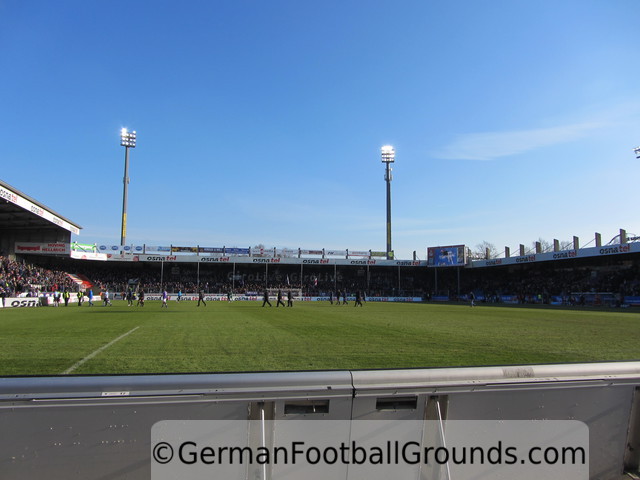 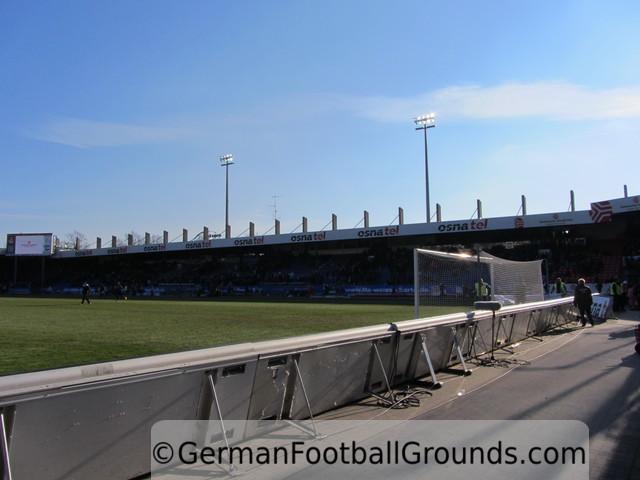 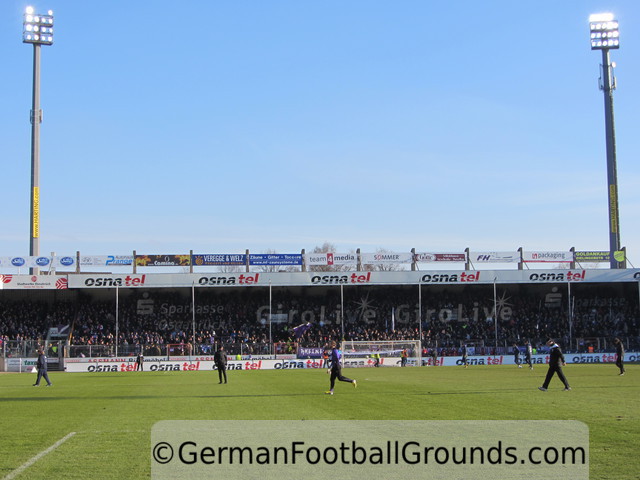