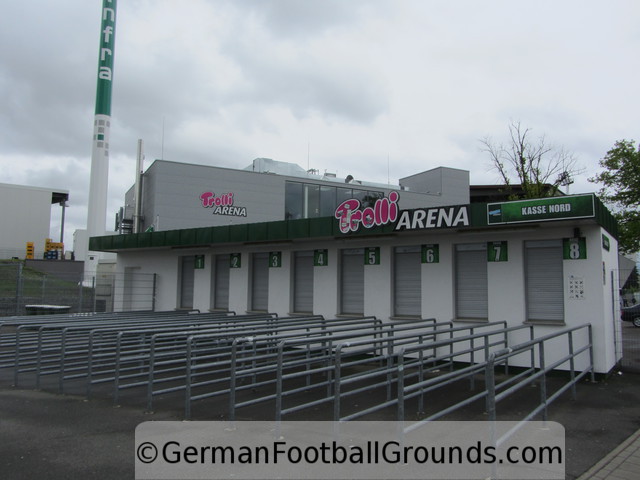 The Trolli Arena, named after sweets manufacturer Trolli, dates back to the year 1910, when the original ground was opened, then called 'Sportplatz am Ronhofer Weg gegenüber dem Zentral-Friedhof', which roughly translates as 'Sports ground on Ronhof Lane opposite the central cemetery'. As usual, the ground nowadays looks nothing like the historic ground. Since 1997, every couple of years bits and pieces have been exchanged or extended, the last extension was performed for Fürths first stint in the Bundesliga in the season 2012/13 and resulted in the south stand being remodeled and fully covered.

The Trolli Arena can nowadays accomodate 18,000 spectators, of which 9,5000 can be seated, the remaining 8,5000 places are standing space. The ground is quite old school and the non-matching stands and the classically looking floodlights add to its charm. The north stand (Nordtribüne), on one small side of the pitch, is a fully covered stand with standing space only and it is the stand where Fürths supporters are located. The front side of the roof is adorned with the slogan 'Diese Stadt und ihr Verein werden immer unsere Liebe sein', which roughly translates as 'This city and its club will always be our love'.

If you arrive quite early, you should be able to find a parking spot somewhere close to the ground. Anyway, the officially recommended parking lot is at IKEA in Fürth, the address is Hans-Vogel-Straße 110, 90765 Fürth. The parking lot is about half a mile away from the ground.

Take buses 173, 174 or 177 from outside main station until stop 'Friedhof'. From that stop, just turn right into Mauerstraße and you'll arrive directly at the ground. For some home games, there are special buses which take you directly from the main station towards the ground, so keep an eye out for them.

Tickets allow you to travel to and from the stadium from 4 hours prior to kick-off until 3 am the following day inside the Traffic Association Nürnberg (Verkehrsverbund Großraum Nürnberg (VGN)). If you do not already have a ticket, a single ride from the main station to the ground costs 1.70 €.

The stadium in Fürth is only about one and a half miles away from the main station and the walk to the ground takes you through the city center. Just take a left after leaving the station, then turn right into Schwalbacher Straße. Head straight on over Kohlenmarkt and turn right on reaching Hirschenstraße. The road changes into Königsplatz and Henri-Dunant-Straße, just follow these until you turn right onto Erlanger Straße and cross the river Pegnitz. Turn left into Friedenstraße and continue until the end of the road, then turn right into Mauerstraße, which takes you directly to the stadium.

These are regular ticket prices for matches in the 2. Bundesliga in the 2014/15 season.

Fürth is a regular side in the 2. Bundesliga and draws quite good crowds, however the ground is usually not sold out. During Bundesliga times, for the first and only time in the season 2012/13, about half of the games were sold out.

Normally, you can order tickets via Fürth's own ticket shop (German only). Fürth does not cooperate with Viagogo, but you might of course still try your luck there. 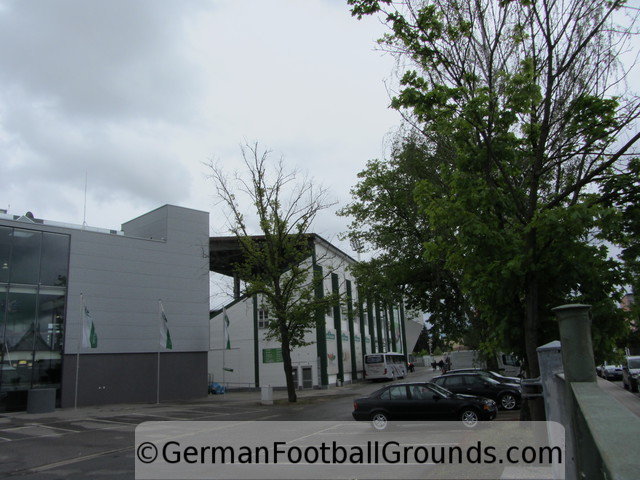 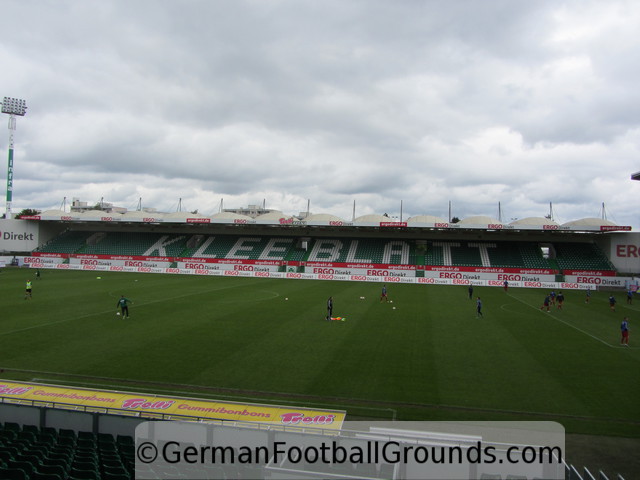 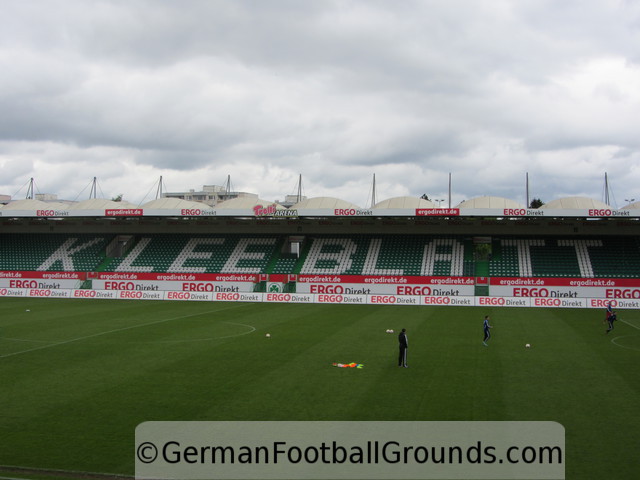 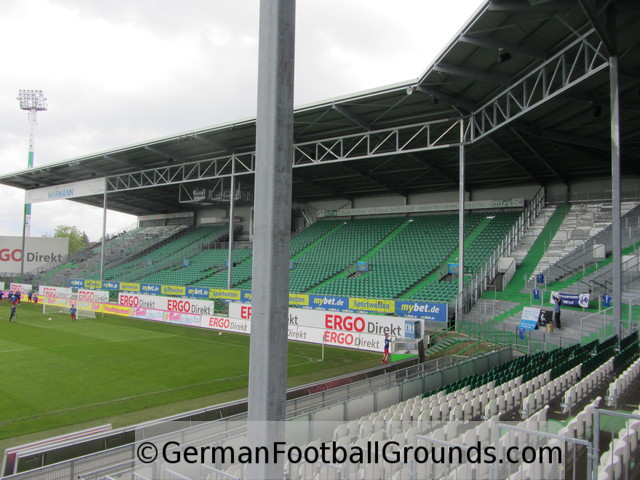 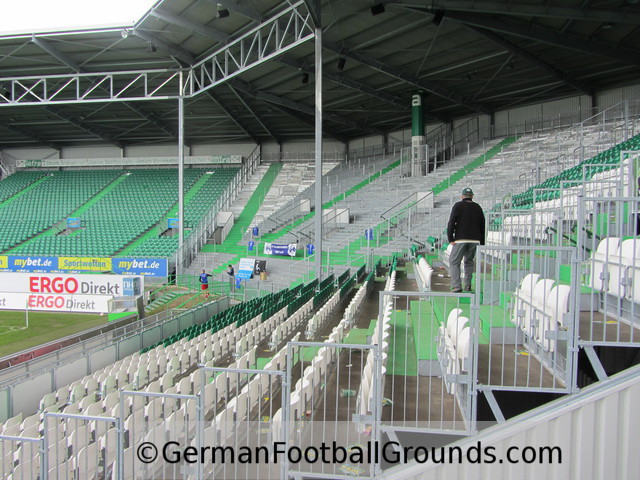 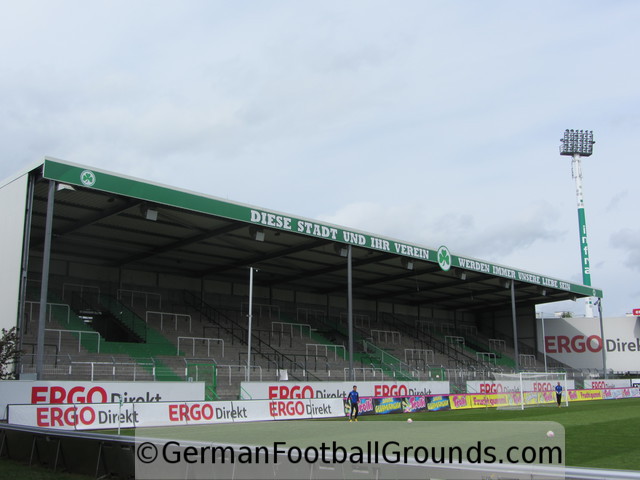 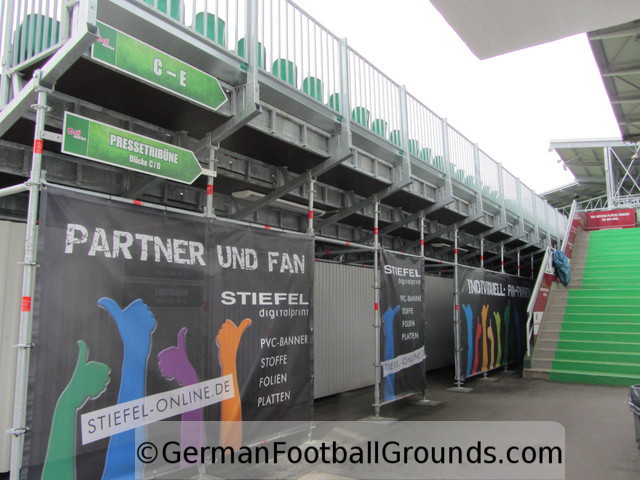