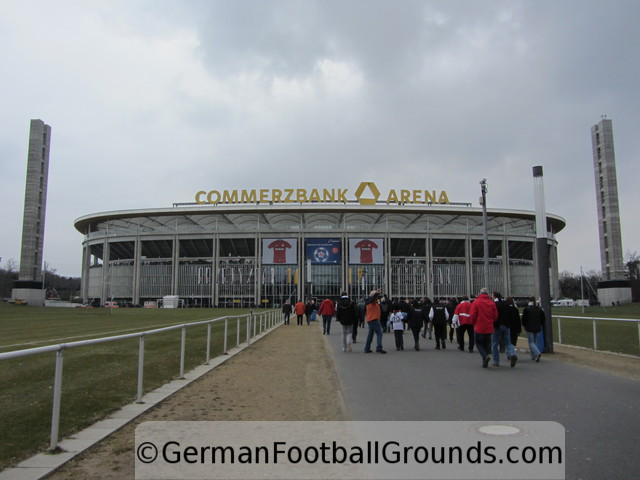 The Commerzbank-Arena, named after German bank Commerzbank, is the home of Eintracht Frankfurt and actually the fourth stadium on the same location. The last renovation was done before the World Cup in Germany in 2006 and the stadium underwent major renovations from 2002 to 2005 and hosted both the opening game as well as the final of the Confederations Cup 2005. The stadium is located directly besides the headquarters of the DFB, the German football association.

Where the previous stadium still featured a race outer ring, the Commerzbank-Arena has done away with it, resulting in a very compact stadium. The spectators are accomodated in two tiers, between these tiers lies a two-storied band of executive boxes. The stadium features an impressive, tent-like roof construction, which, when not in use, is stored in a giant cube hanging over the pitch. The sides of the cube are covered with video screens.

Frankfurt's supporters are located in the west stand and the complete lower tier is standing space, the rest is seating space, as is the rest of the stadium, apart from a part of the east stand for visiting supporters. Visiting supporters are located in the east stand, standing space is in the lower tier in the corner towards the south, blocks 18 an 20, seating space in the upper tier, blocks 17, 19 and 21.

If you come by car, the address of the Commerzbank-Arena is "Mörfelder Landstrasse 362, 60528 Frankfurt am Main, Deutschland".

You'll be arriving either via the A3 or A5 and once you reach the junction 'Frankfurter Kreuz', you can follow the signs with the football. There are three parking lots close to the stadium, the 'Waldparkplatz', the 'Parkplatz am Gleisdreieck' and the 'Parkplatz an der Isenburger Schneise'. Traffic routing will guide you the parking spaces, for each of them the fee is 5 € (4 GBP) per car.

For each of the parking lots, you have to walk quite a bit, so you might just as well head to 'Börostadt Niederrad', where you can park free of charge. Coming from the motorway, follow the signs towards 'Niederrad' and find a parking space, officially recommended streets are 'Lyoner Straße', 'Herriotstraße' and 'Hahnstraße'. Depending on where you actually park, your walk can be around two miles and anyway, as there is a lot of traffic coming both from the motorway and the city, I recommend finding a parking spot well in advance.

If you already have a ticket for the match, you can travel to the game inside the huge Rhein-Main-Verkehrsverbund (Rhine-Main traffic association) free of charge, so just leave your car parked and travel by public transportation if you can.

From the main station take the S-Bahn S8 or S9 the direction of Mainz or Wiesbaden to the stop 'Stadion', the journey should take just about 6 minutes. You can also take tram 21, which is more convenient if you have tickets for the main stand or the east stand.

Frankfurt probably has the best connection of any stadium to an airport. If you come by plane to Frankfurt, just go to terminal 1, platform 1 and board either an S8 towards 'Hanau' or an S9 towards 'Offenbach Ost' and exit 3 minutes later at the next stop, which already is 'Stadion'.

You can reach the stadium completely on foot, but I do not recommend it. The walk is not great but long, at least three miles. Have a look at the route on Google Maps if you fancy a walk.

Frankfurts ticketing is a tad complex, as there are five categories of games (A, B, C, D and E). Depending on the category, the cheapest seating tickets cost between 23 € and 40 €, the most expensive ones between 55 € and 85 €. Standing tickets are always 15 €, however. The following list gives the prices for the cheapest game category, E.

In the Bundesliga, Frankfurt has quite a high average attendance of over 90 %, however not many games are sold out. Usually, you do not need to be a member of Eintracht Frankfurt and tickets are available via general sale. If you like to have an inenxpensive ticket, you should check well in advance, if do not mind the price that much, you might be able to still get tickets on short notice. Follow this link to Eintracht Frankfurt's online ticket shop.

If a game is sold out, you might try your luck with the usual sources, for example Viagogo. As usual, fees are quite steep for these transactions, for example if ordering a ticket for 40 € (33,50 GBP), you'll currently end up paying around 60 € (50 GBP). Note that Viagogo is not an official partner of Eintracht Frankfurt. 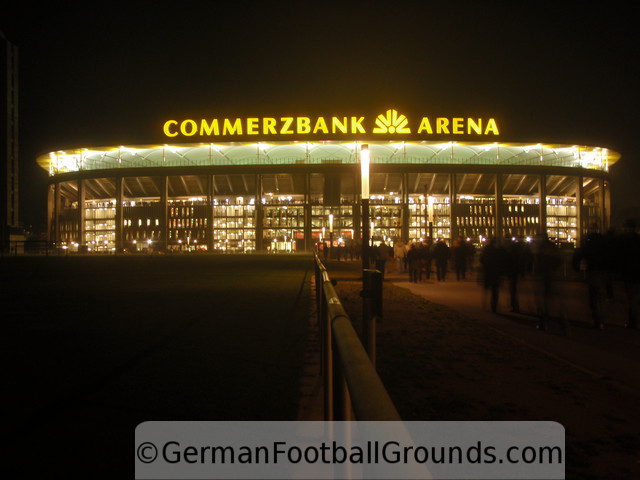 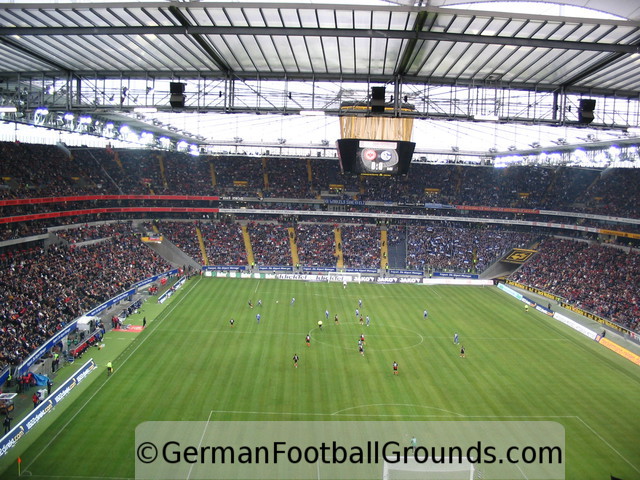 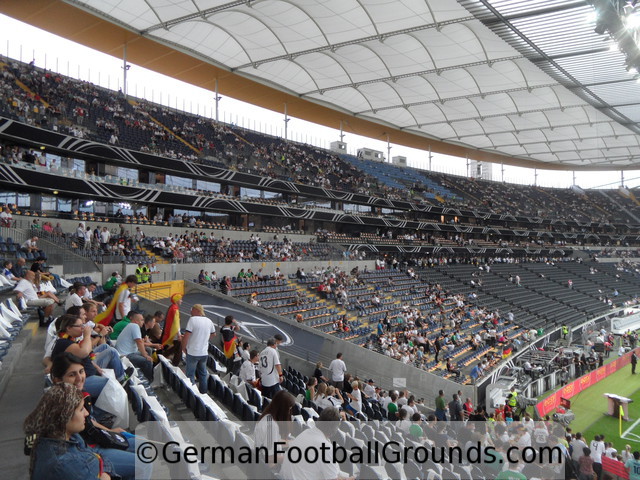 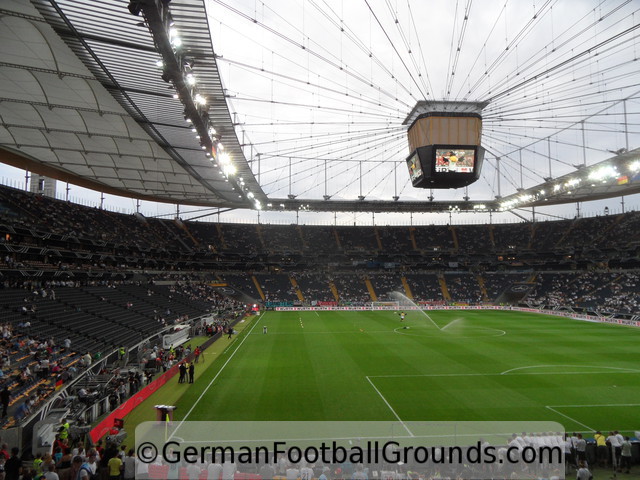 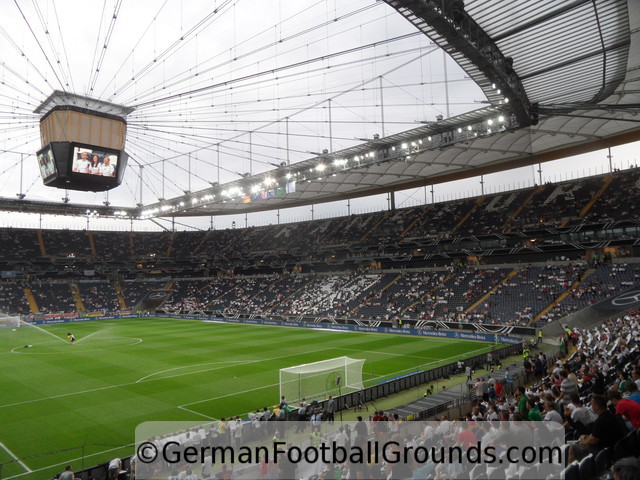 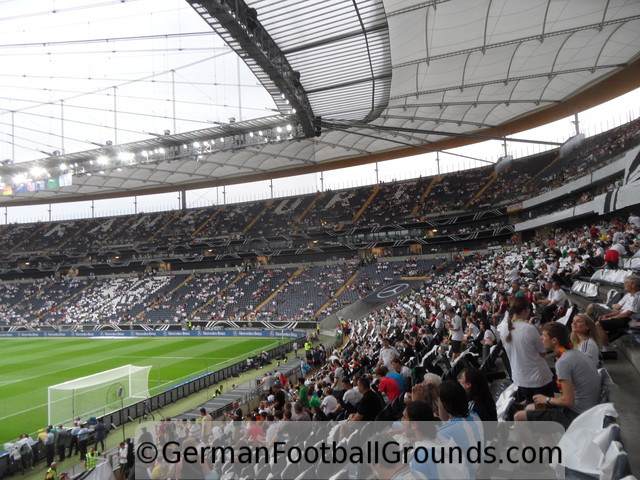 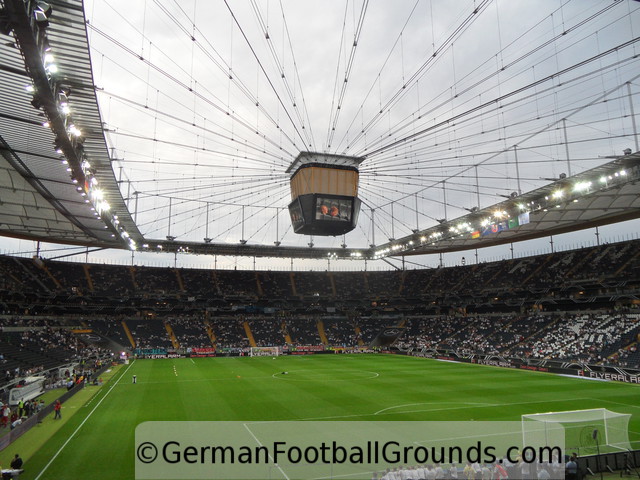 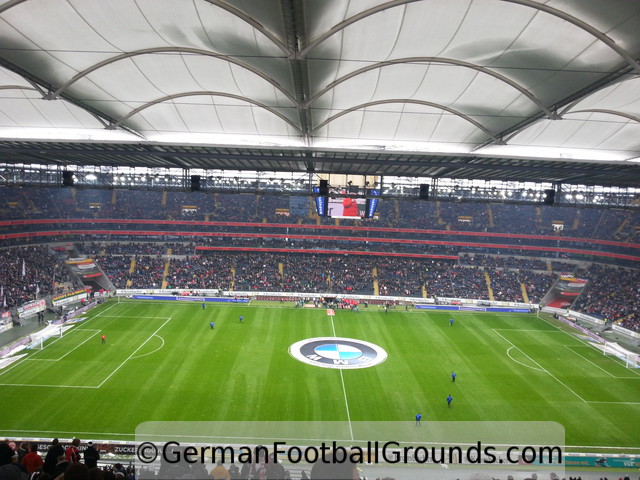 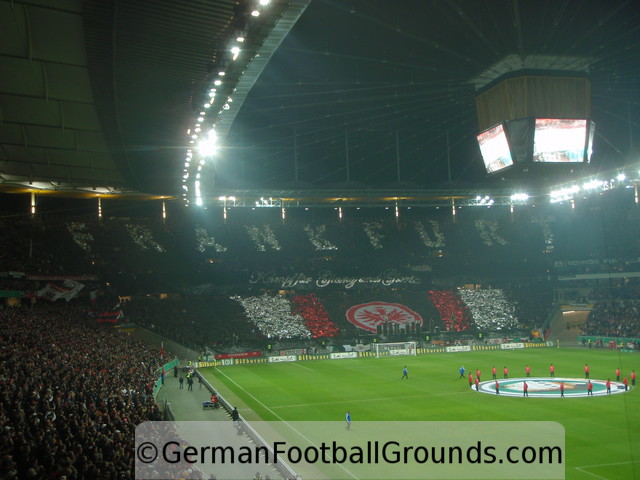 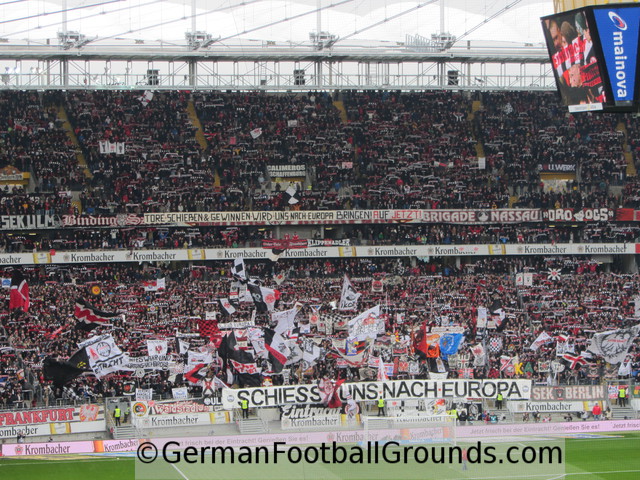