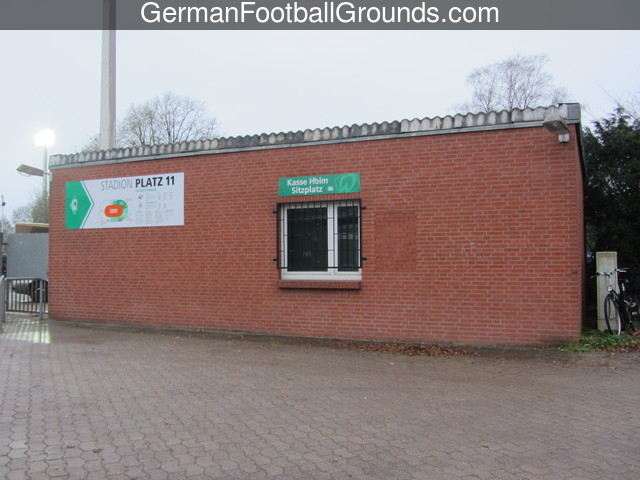 The Weserstadion Platz 11 is a better stadium than its name suggests, at least that is something positive - the name itself reminds me of pitches in some remote village with no terracing and no stands at all. ;) Still, the ground is the smallest stadium of the 3. Liga, with room for only 5,500 (1,000 seats) spectators. 3. Liga requirements normally state a minimum capacity of 10,000 places, of which at least 2,000 must be seats, so the ground is an exception to the rule.

The stadium is located just 300 yards to the southeast of the Weserstadion and you can see big brother's iconic floodlights from inside the ground (the ground has its own floodlight pylons as well). The stadium has only one stand, the Westgerade, which is covered and offers seating space for about 1,000 spectators. The remainder of the stadium is terraced, although there are only a couple of steps so you will be standing quite low. Add the fact that the stadium features a race outer track and you end up with a not so great view on the playing field.

Do not miss the opportunity to visit the club house, which is to your left when you enter the stadium. Quaint atmosphere in there, live football on the telly and a lot of Werder Bremen pennants.

Visiting supporters are located in the south and the southern side of the Westgeraden, Bremen supporters will probably be all over the place.

If you come by car, the address of the Weserstadion Platz 11 is "Franz-Böhmert-Straße 1, 28205 Bremen, Deutschland".

You should be able to park at the stadium, P2 and P2a are recommended for home supporters, P6 for visiting supporters.

From the main station or the city centre, take tram 10 towards Sebaldsbrück and exit at the station 'St.-Jürgen-Straße'. Turn right into Lüneburger Straße and at the end of the street turn left on Osterdeich, from where you have about 300 yards left to the Weserstadion. Platz 11 is located about 300 yards to the southeast of the stadium.

Public transportation in Bremen might mean arriving by ship from the city centre. Check the ferry companies home page for more information.

The ground is located around two miles away from the main station and merits a walk which will take you through the city center and the Osterdeich, a street that is laced with pubs and bars.

Leave the main station and head southwards, with the station in your back. Either via Bahnhofstraße or Herdentorsteinweg, you will reach Herdentor and enter a pedestrian area. Continue straight ahead onto Sögestraße until you reach Obernstraße, then turn left. Note that you are at the town hall now, where you can find both the Bremen Roland and a statue of the Town Musicians of Bremen.

From the town hall it's basically a nearly straight walk to the stadium. Continue on Obernstraße, leaving the town hall to your left, which turns into Am Dom, Domsheide and Ostertorstraße. After you pass the municipal library to your left, the street turns into Am Wall, then changes into Ostertorsteinweg and Vor dem Steintor. Continue until you reach the intersection with Lünerburger Straße, where the aptly named Werder Imbiss, a snack bar, is located; this is also the place you will arrive at with the tram, St.-Jürgen-Straße. Turn right and when the street ends after around 250 yards, turn left onto Osterdeich. From there, it's only about 250 yards more to the Weserstadion and Platz 11 is about 220 to the east of the stadium.

These are normal ticket prices for 3. Liga matches, just for your orientation. You can visit the stadium for matches of the women's Bundesliga (first division), if you are so inclined as well; tickets are a couple of Euros cheaper, then.

As with other second teams, you should be good to buy tickets on any match day as there are no real derbies in the 3. Liga for Bremen II. Nonetheless, check the home page of Werder Bremen II for ticketing information just to be on the safe side. ;) 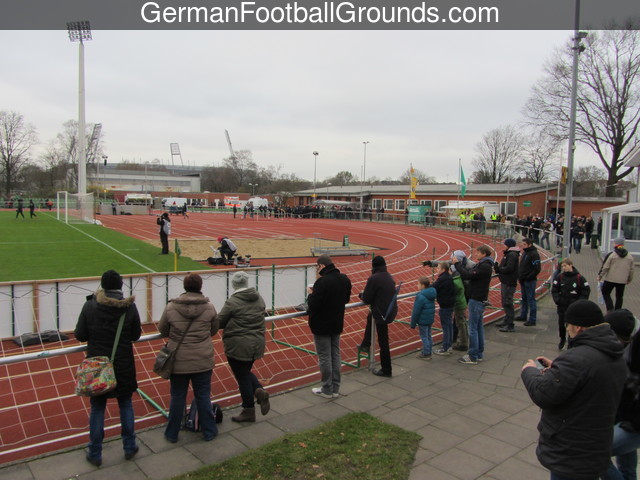 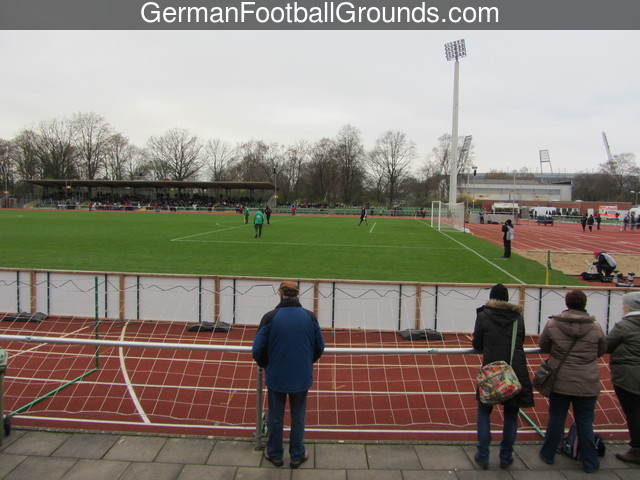 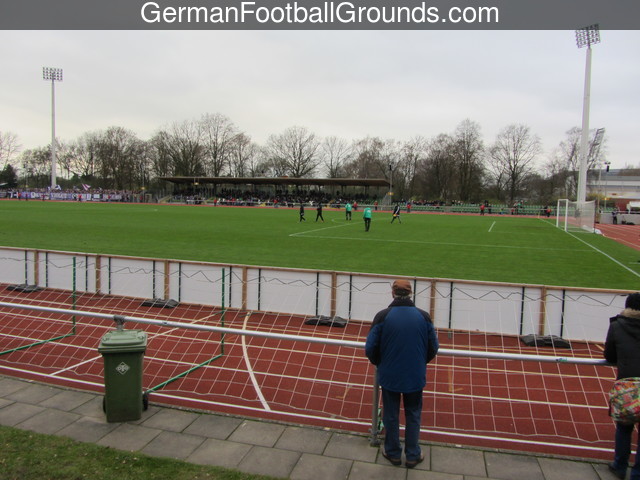 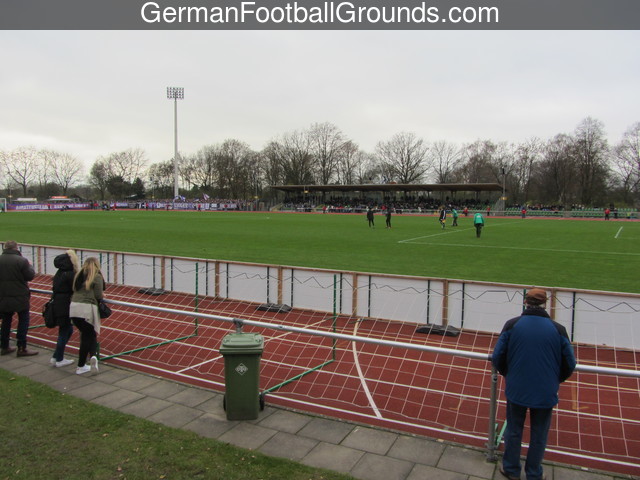 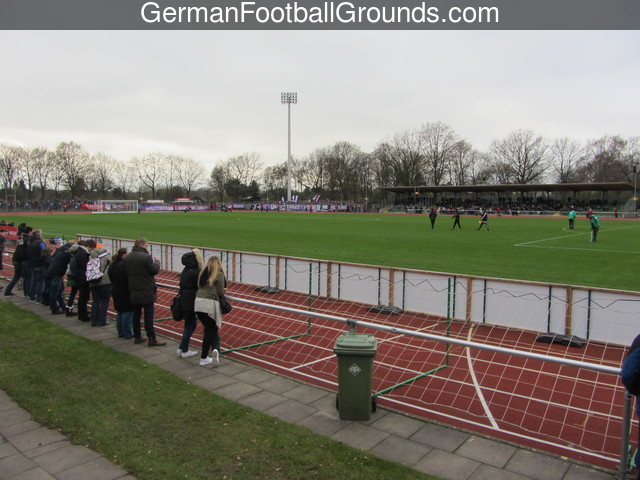 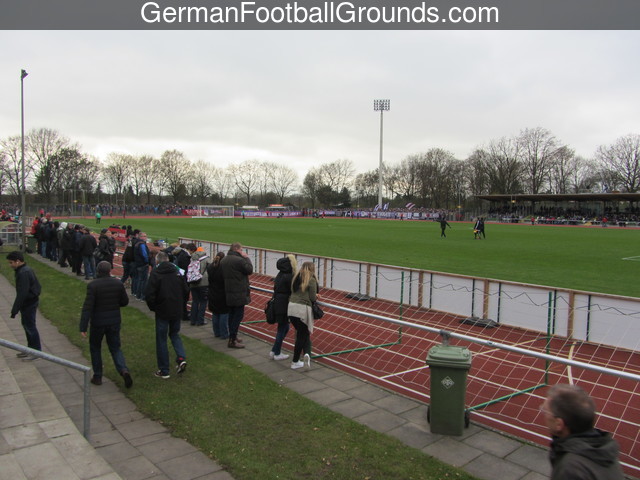 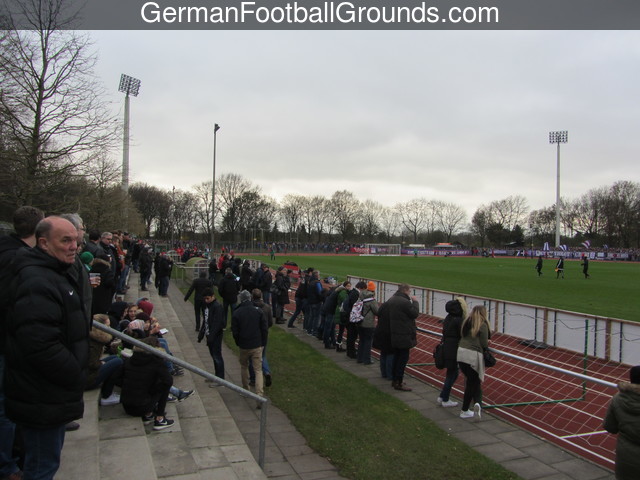