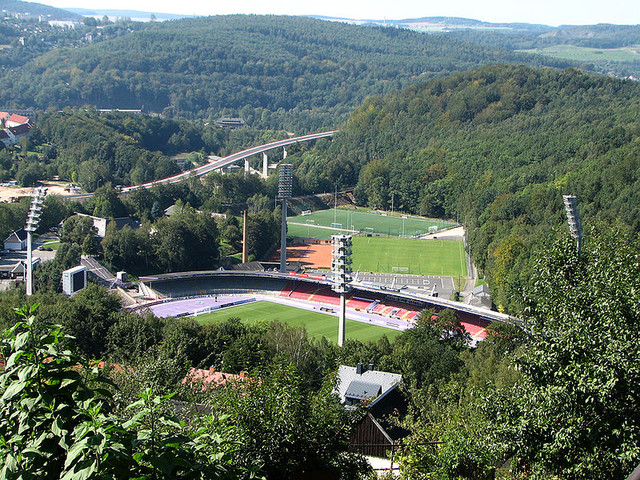 The Erzgebirgsstadion is a classical football stadium with race outer track. The stadium is basically divided in two parts by two gates behing the goals, one in the south west corner, one in the north east corner. The northwestern part is basically the main stand and is fully covered, on the opposite side only the central blocks C, D and E are covered. The stadium features four impressive floodlights.

If you come by car, the address of the Sparkassen-Erzgebirgsstadion is "Lößnitzer Straße 95, 08280 Aue".

As usual, there are basically no parking spaces at the stadium itself. However, Aue is a small town and crowds are normally not huge, so you should be able to find a parking space somewhere close and then just take a short walk to the stadium.

The greatest challenge on traveling to the ground by public transportation is getting to Aue in the first place as Aue is quite far off the beaten track. Nonetheless, if you happen to arrive by train, here are directions from the main station.

First of all, you can continue by train or bus to a stop directly outside the Erzgebirgsstadion. Busses leave outside the station, the corresponding stop is 'Aue, Stadion' and a single bus trip is priced at 1.60 € and takes less than 10 minutes.

If you like to walk, the stadium is only about a mile away from the main station. On leaving the station, turn right onto 'Am Bahnhof', then take the first left onto 'Lößnitzer Straße'. Just follow the road until you reach the stadium.

These are normal ticket prices, just for your orientation.

Tickets can be obtained via Erzgebirge Aue's online ticket shop.

The stadium is adequate for the 2. Bundesliga or 3. Liga. Aue does not usually draw huge crowds and in general there are no problems getting a ticket.

Tickets can be obtained via Erzgebirge Aue's online ticket shop.